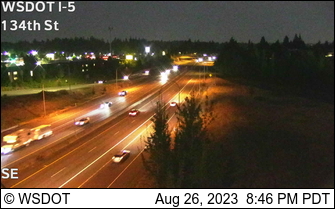 Best Viewed on a Wider Screen

I enjoy watching the weather and built a webpage that pops up when I load my browser. It displays the current temp and forecast, and the view from the traffic webcam nearest my home.

The following are random images I collected over the years. It started with one I wanted to show a friend, and then another, and...

Click on a category or scroll down the page:

The Coca Cola truck from the TV ads at Christmastime?  YouTube Video

No idea what this is. It looks like a southbound train stacked with barrels.

What would cause all this white light? It looks like time-lapse photography.

Ask yourself what you are seeing before reading the text below.

The image above was captured during the construction of the 139th Street overpass, which explains the numerous traffic barrels on the roadway. Most guess that the image shows a northbound truck about to pass through a tunnel, perhaps a temporary structure built to protect motorists from falling construction debris.

In fact, it is a southbound truck and the "tunnel" is an optical illusion caused by extreme differences in the temporary lighting installed to aid nighttime workers.

The image below shows approximately the same camera view.

What is the yellow blob?

Smoke from WA and OR wildfires

The first image looks like just a car fire with a pigeon watching. But in the second image, you can see that it's become something much more with the car blocked in and surrounded by police vehicles.

I've never made a point of looking at the webcam; I just notice it from time to time. So it's no surprise that it took a decade to capture a dozen images of unusually large trucks.

However, when I looked over the images I was very surprised to find multiple images of the same trucks, each at the same place on the highway.

Northbound I-5 off-ramp at 134th Street

Note the beautiful colors in the sky, worthy of a Monet oil painting